With two teenage sons playing competitive sports, I spend a lot of my “free” time traveling for soccer. For many years the travel was in-state with an occasional out-of-state tournament. Last year, that all changed when my younger son was on a team playing in Region 3 competitions. All of a sudden our regular season games involved teams in three different states and many, many hours in the car.

While this certainly took our family’s commitment to soccer to a whole new level, we realized pretty quickly there was a lot to be gained as well. The boys played some amazing soccer and had the privilege of representing North Carolina in the Regional Championships in Little Rock in June. They built friendships that came with not only being teammates, but spending countless hours hanging out together in hotels and on the fields.

However, it hasn’t just been my son getting something from this soccer adventure, I have too. I’ve made new friends who adore my son and have my back as a working mom trying to juggle all these different time commitments. I got to spend one weekend catching up with one of my dearest friends as we schlepped to Chattanooga with our boys. It may have been a long drive, but I wouldn’t trade that time for anything because we actually got to sit and talk uninterrupted for nearly 16 hours in the car. I have even discovered some great breakfast places as we try to find something new in each city we visit for the first time. All of these experiences make the time, money and effort our family puts into soccer worth it for us all.

The boys had a strong start to the season with a 5-1 win. After a team dinner and the official activities were out of the way, the boys wandered off to hang out together and the parents did the same. The other U14 boys team from our club was also at the hotel and as the evening wore on everyone intermingled together.

At one point there were about 10 of us sitting around a large table and the stories started coming. The good, the bad and the ugly of tournaments won or lost. The comical adventures off the field. The treacherous weather we survived to get to those tournaments or games. People came and went from the group. Side conversations started with folks catching each other up on the latest happenings in their lives. Laughter dominated the conversations, but a few solemn moments were also had.

All of a sudden I stopped to really look at what was going on around me and I realized how lucky we were to share this experience. All of our boys have played soccer together for years. They have been teammates and competitors. They have won and lost games. They have cheered for their friends success and consoled each other when they have struggled. It was almost as if we had one collective memory of our boys playing together because somehow or someway they were all interconnected. The lines completely blurred on who had been on what team because everyone had a piece of the story to tell.

It’s not always easy being the soccer mom or dad. As much as I love watching my boys compete, there are times when the last thing you really want to do is drive 6 hours and spend yet another weekend on a field or at a hotel. Sometimes, though, you get those moments that make it all worthwhile. Sitting around a table with these parents who are on this youth sports journey with me, sharing stories – and a whole lot of laughter – made me very grateful that it’s not just my kids who get this experience, but me too.

It’s not even Noon on Saturday, yet my weekend of unexpected discoveries has already begun.

My main objective for this blog has always been to capture the sense of adventure that I get when I travel. It’s such a fulfilling experience for me and the best moments are when I discover something new and take myself out of my day-to-day experiences. That is easy to do when you are traveling to a place you have never been to before. However, the last 24 hours has reminded me how easy it is to do that in your own backyard.

Last night, we had a last minute meet up with friends at a new brewery in North Raleigh. The Compass Rose Brewery describes themselves as “a modern take on the classic beer hall” and that is really a perfect description. 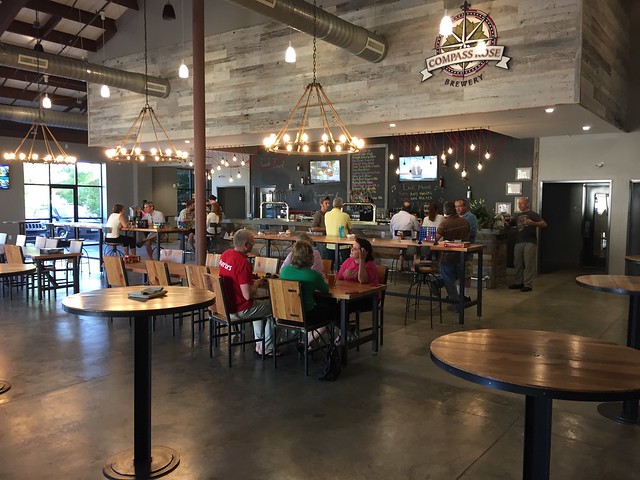 The wide open beer hall was packed when we arrived, but what struck me the most was the complete mix of people that were enjoying the ambiance. There were adults, kids and even dogs all hanging out together chatting, enjoying the very good beer on tap and just chilling out on a Friday night. There were huge tables and benches where folks were playing board games and the teenagers in our group dove straight into a two-hour game of Monopoly. It was a fun evening and discovering a place with a cool vibe 10 minutes from home was an unexpected treat.

This morning I dropped my boys off for a pick-up game of soccer and decided to go get a coffee. I was heading towards the local Starbucks drive thru wishing that my favorite coffee shop was just a little bit closer to this side of town. I remembered that there was another place – Jubala Village Coffee – that I had heard about from many friends, but had not yet visited. Boy, was it worth the stop.

There were about 20 people in line when I arrived which is always a good sign. I was reading through their chalkboard menu when the seasonal latte caught my eye – Coconut Cream Latte. Sold! I have no idea what they put into that coffee, but it was delicious. Sorry Starbucks Eggnog Latte, but a new favorite has arrived in town. It’s probably a good thing that this is just a seasonal drink. It tasted so rich and creamy, with just the right hint of sweetness, that consuming too many of them is probably not good for my 40-something-year-old waistline.

While I am not the first person to discover these cool places, they were new to me and a change in my day-to-day routine. Weekdays have been hectic and my weekends without kids soccer activities are quickly dwindling as the new season is almost upon us. These last 24 hours were a great reminder to step out of the chaos and into a place that both recharges me and inspires me. Both locations touched a part of me and made me excited to tackle the week ahead. You can’t ask for more than that.